-My whole team at the beginning of CBL

My students worked on Challenge-Based Learning solutions in groups for the first time this term. I want to share what their solutions were in order to give readers an idea of the range of ideas students came up with on their own, and their varying degrees of success in implementing those ideas.

When my team first started CBL, it was really difficult to get our collective head around what we might expect students to come up with as a solution, so we pestered our CBL expert teacher, Bec, for ideas on what challenge solutions might look like. She pushed back on this and told us we didn’t need to have the ideas, that the kids would get there. We kept on pestering and eventually she relented and gave us a few examples of what kind of outcome we might see, but with the stipulation that we had to let the students come up with ideas, and not try and feed them our own ideas and make them think it was their own.

Now I’m 3 terms of CBL in, and with Bec’s philosophy in mind, here are some examples of what grade 2s can come up with and do on their own. Without my own brilliant ideas. I promise.

Big Idea: Power
Challenge: Use power in a positive way.

Both of these groups independently decided to make a fitness/exercise club that ran at break times. Both groups came up with a plan of how their club would run; one group wanted to play a charades game that would involve participants guessing the exercise, then completing it, and the other group simply had a list of exercises and were going to show participants how to do them correctly, then have everyone complete the exercise. Both groups made poster ads to hang around the school using the Pic Collage app and spoke to grades about the clubs they were running. The clubs started off with a bang but petered out quickly for a few reasons (memory, enthusiasm, students not getting along, etc.). I think the fact that grade 2s can run a successful club for other students without any help from teachers is quite impressive!  One of the groups did a powerful reflection on what went well, what went wrong and how they could change it, and made significant improvements to their plan to help their club run better.

Purple group chose to write a persuasive letter to the Prime Minister of Australia to convince him to hire more builders to build free homes for homeless people. This was quite powerful for this group when they actually received a response from Tony Abbott, which, among other things, congratulated them on being so passionate about important issues and reminded them that as the future leaders of our country, they should continue to champion causes that are important to them. (The letter carefully evaded the issue of building people free homes, but my students are inspired to become PM nonetheless).

Purple group’s solution was to make an ad that told the world that we don’t want bullies. They wrote and filmed and edited a video using iMovie on an iPad and shared their solution with the world through the class blog. Blog post here.

Pink group’s solution was also a video. They wanted to make a short video that would encourage people to exercise every day. They wanted to share it with the world by advertising it on our class blog and Twitter. It did not get shared in the end because of the time it took to film and some techie difficulties which meant they had to remake their entire work. Their video involved them doing a range of exercises and some text about the names of exercises and what people should do to get fit.

This group decided on a persuasive blog post about using electricity sparingly and some tips on how to use it better. Their post can be viewed here.

As this was the first time students worked in small groups to complete a task of their own devising, the focus was on understanding the task ahead of them, and on individual roles and responsibilities of the members in each group.  Now that we have a firm grasp on that, the next round of CBL solutions will have more of a focus on the quality of the outputs, rather than just ‘getting it done’. For example, the ‘No Bullies Allowed’ video group might work on coming up with a list of helpful tips for not being a bully, and valuing friendship, and work on making sure the dialogue in their video is easy to hear. Or the exercise video group might contact teachers to see if they could show it to their class every morning for students to get warmed up before starting the day, so that their solution has a genuine audience and will make a difference.

Overall I am really happy with the variety and quality of my students’ (and my own) first attempt at group CBL solutions. I am constantly amazed at the way my students come along for the ride when I think I might be pushing them too far. It is truly amazing what a bunch of 8 year olds can do when you don’t tell them they can’t.

If you have something of your own about CBL solutions, please share. I would love to see it! 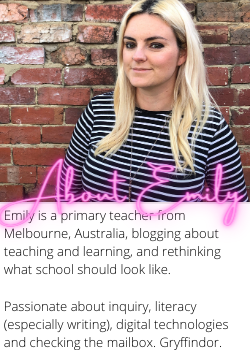